My nearest and dearest. 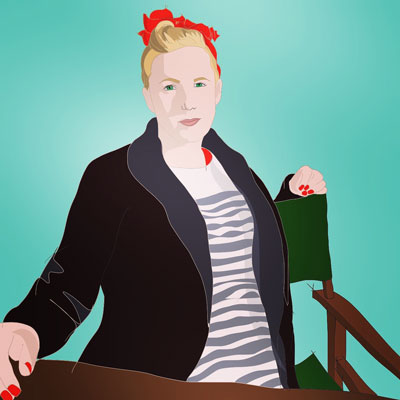 This is Verity – my dear friend and TV Props Buyer extraordinaire. She lives in Cardiff and is currently, as always, living life to the very full. Sailing, caravanning, singing jazz, organising art exhibitions and working very hard on a large drama series. Being based at home, as all us TV folk know, leads us to the very best life. 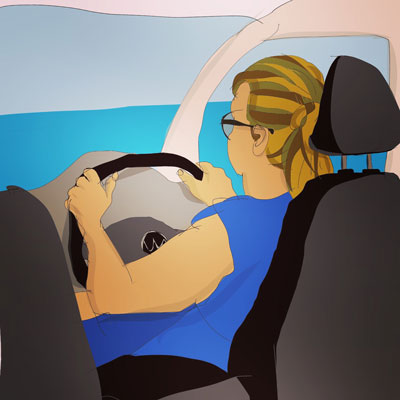 Sarah is Richards sister. I rather like this sketch of her driving because it says it all. She is always doing things for other people. She is literally the kindest most generous and helpful person I know. Here we are on route to a day trip in Llandudno. She is the director of the excellent Charity Organisation www.selfhelp.org.uk. 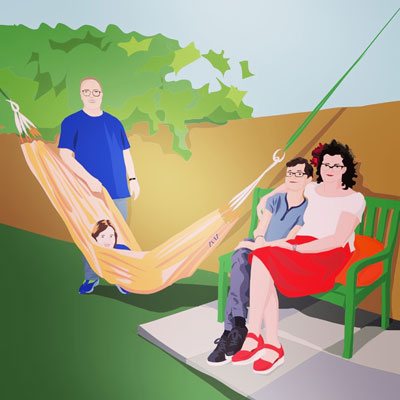 One of the very few family portraits I have undertaken is of my good friends Kate and Ian with their two delightful children, Bella and Alex, in their garden in Oxhey. Every summer we try to keep the weekend free to enjoy the Oxhey Open Gardens weekend where we get to see the most beautiful and extraordinary gardens in this tight knit community. 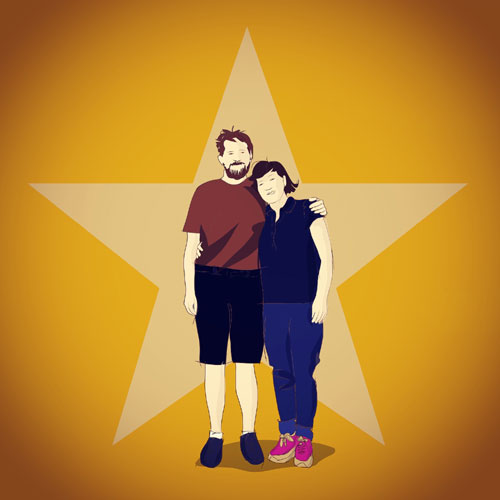 Myself and Richard, created from a photo taken the day we moved to Hertfordshire in June 2013 by Jack Stow, www.healthy-balance.co.uk/dr-jack-stow our lovely next door neighbours' son, who not only photographed us at the entrance to our cottage but kindly helped us with bringing in all our furniture and boxes. I think as a responsible Chiropractor he couldn't just stand by and watch us. 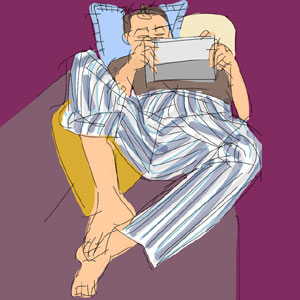 Richard. Quite undeniably and unilaterally agreed my better half. Often to be found absorbed in his iPad. Whilst he assures me he is reading some great work of literature, I am fairly sure he's looking at apps or playing Suduko. 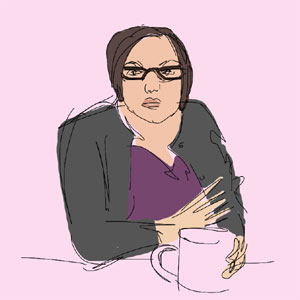 Elizabeth. My sister, early in the morning sitting in her kitchen in Connecticut. Happy to have me draw her for those few moments when she gets to drink her coffee and dream of antiquing, before her children are up and about. 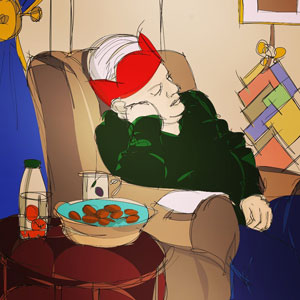 Uncle Ted spent his working life as a dairy farmer. When my dad was young he used to spend his summers on Ted's farm. When we were growing up we always saw Uncle Ted and Auntie Gladys at Christmas time. This family tradition continues with my cousin Stephen and his wife Cerys. 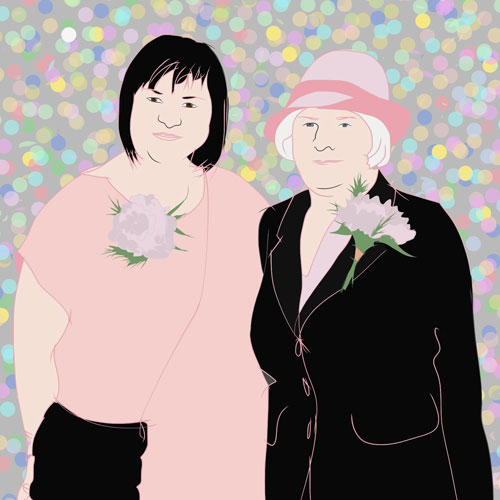 When I was designing the BBC Drama Three Girls, my starting point was research. Halina, who lives in Rochdale, kindly showed me around the town, which helped me enormously. The drama went on to win five BAFTAS in 2018. Here is Halina and her mum at a wedding, in front of a wall of giant confetti. 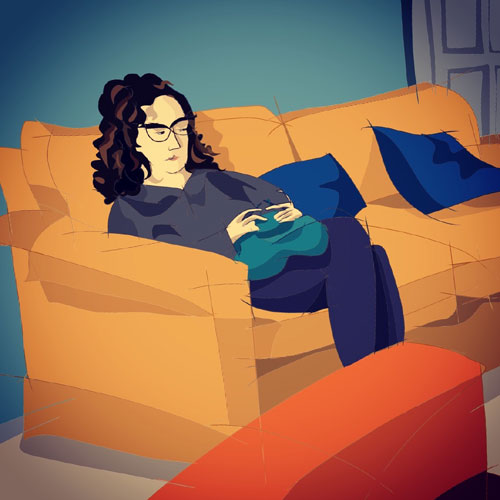 This is Kate, knitting. She kind of works to a pattern, kind of doesn't. But she does choose extremely fine wools so everything comes out looking lovely. 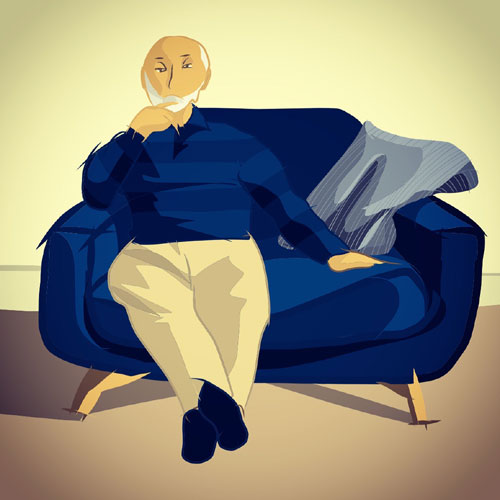 This is a recent sketch of Tony, Richard's dad. He's sitting on one of the sofas in Sarah's living room. (Sarah is Richard's sister.) We had just returned from her local curry house and were all feeling rather full. 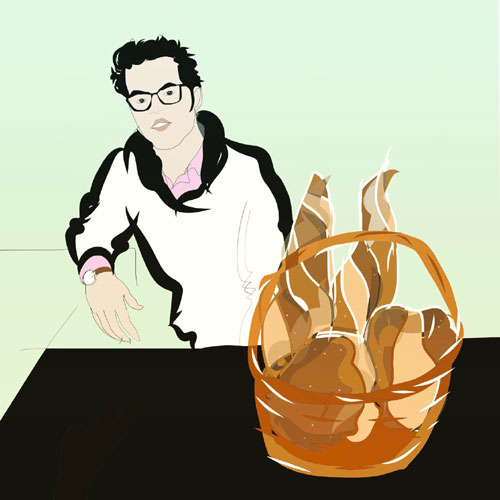 When we moved to Hertfordshire in 2013, we didn't know a soul. So one of our first ways to get to know folk was to partake in our local village market in Little Gaddesden. One week, Sarah Green (who makes great homemade meals) brought along William with his sourdough breads, bakersdozentring.com. Although we don't sell here often these days, we still love going whenever we can – me for the homemade items, Richard for the bacon sandwiches. 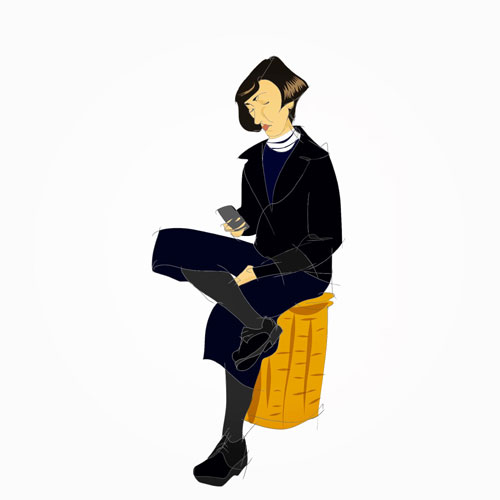 In 2017, Rosie and I were working on the SKY Drama Save Me. We were returning to a location we had previously decorated, and thought we had a simple task of cleaning and tidying. But the flat had been robbed and totally trashed. Here is Rosie on her mobile quietly and calmly organising carpenters and painters to restore and redecorate the flat while sitting on a clothes basket, one of the few things left in the flat. 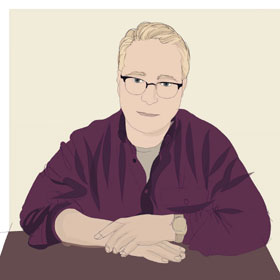 Howard. The man who's name appears at the bottom of every page of this website. Best friend and driving force in having this site become a reality. This evening we were sitting after dinner, catching up at a restaurant along The South Bank, something we definitely need to do more often. 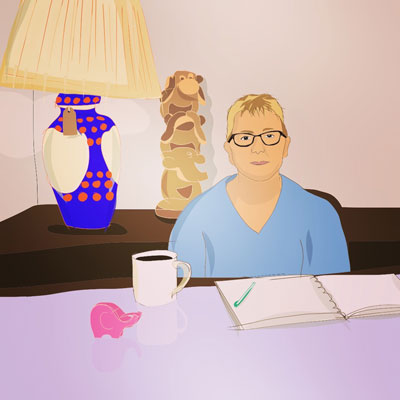 Penny is a great inspiration to me. She loves crocheting and knitting, and she sells her wares at her own shop, The Linen Chest at Waterhall in Hertfordshire. Visit her on Facebook.